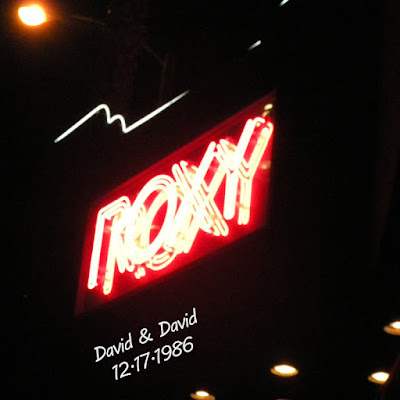 Remember David + David, that dynamite rock duo (consisting of David Baerwald and David Ricketts) that burst on the music scene in 1986 with their powerful, dark, and dynamic debut single 'Welcome to the Boomtown'?  Well I certainly do, but was only just reminded of them when as I was transferring some old music files to a new hard drive and I came across this excellent show and recording from David + David in the midst of their debut tour. Of course, if you don't remember them it is probably because they came and went pretty quickly, as after their tour in support of their only album, Boomtown (1986), they quickly broke up and went their separate ways. They only had that one 'hit' single, which only just broke the top 40 on the charts. But as it is with most so-called 'One-Hit Wonders', there is alot more to their story than that one hit single. Although receiving considerable air-play on FM radio, their potential follow-up singles, 'Swallowed by the Cracks' and 'Ain't it Easy', which also were fine songs, never broke through onto the charts, and that was it for the 'band'. Talented multi-instrumentalists and songwriters, David and David had played all the instruments on their album, but never followed with another album. They played as session musicians, and David Baerwald ventured into a solo career, with a couple fine solo albums in the subsequent years,  Bedtime Stories (1990) and Triage (1992), which were critically-acclaimed, but sales-challenged. David Ricketts worked on albums with Toni Childs and Robbie Robertson in the late '80's to early '90's. Later in 1992, David Baerwald, with his producer friend Bill Bottrell founded the 'Tuesday Music Club' which was a loose assemblage of musicians and songwriters that would get together and play (and also sometimes included David Ricketts). Out of that group, and working with an aspiring young female singer-songwriter, developed into Sheryl Crow's debut album, Tuesday Night Music Club, with Baerwald and others from that assemblage sharing songwriting credits on most of the songs. However, with the sensational success of Crow and that album, disputes and disagreements within the group (regarding songwriting and who deserved credit for the sound and style of the album) lead to that association falling apart as well (although Sheryl continued to blossom). Baerwald continued on more as a songwriter than performer, with his songs being recorded and performed by a wide variety of artists, ranging from Waylon Jennings, Fishbone, Susanna Hoffs, Leann Rimes, Holly Cole to Nicole Kidman and Luciano Pavarotti. Baerwald has also worked extensively as a songwriter and score composer for various film and television projects.
But this fine show takes us back to their glory days as David+David, which was a great '80's band, if only for a short time.

Every once in a while, you hear a song you wish you'd written.

After I heard the first verse of 'Welcome to the Boomtown', I was hooked. For obvious reasons.

Here is the proof:

Miss Christina drives a 944
Satisfaction oozes from her pores
She keeps rings on her fingers
Marble on her floors
Cocaine in her dresser
Bars on her doors...

Several verse followed, but they were totally unnecessary.

Wow, I didn't even know this existed, or that anyone even remembered these guys.
Thanks for sharing!