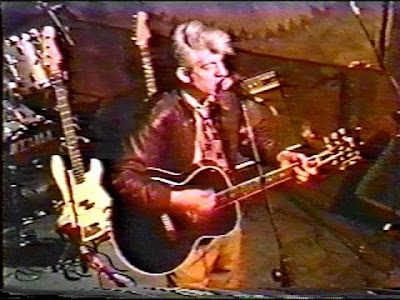 Here's one I've been meaning to get to for some time but just haven't gotten around to it. This is Nick Lowe's short opening acoustic set before Elvis Costello's wild EC & Friends show at the Sweetwater in Mill Valley CA. I have previously posted the Elvis Costello & Friends (including Jerry Garcia, Bob Weir, Commander Cody, Sammy Hagar, Charles Brown, and Kim Wilson, among others) portion of the show, but didn't originally have Nick's set. So here's that opening set from Nick, in excellent quality. This comes at the time between his 1988 Pinker and Prouder Than Ever album and his forthcoming Party of One album (1990) and is around the time that he was transitioning from more of a pop-rocker to more of a troubadour singer-songwriter. Since this was arounfd the time he was recording Party of One, the setlist contains multiple new songs from that as yet unreleased album, as well as a couple more well-known tracks. An interesting set and another piece of the puzzle that was this unusual day for NL and EC. Regarding the EC & Friends setlist, I have also taken this opportunity to upgrade that complete show to Lossless and improved mp3 (320 kbps) versions (was previously posted (years ago) only in a 192 kbps version). So, if you haven't picked up that show (or need the upgrade), now is your chance). Link to the updated page for that full show is also available below. Enjoy.

For the complete rest of the the show, see earlier post for Elvis Costello and Friends (Now available in Lossless (FLAC) and upgraded mp3 (320 kbps) here).