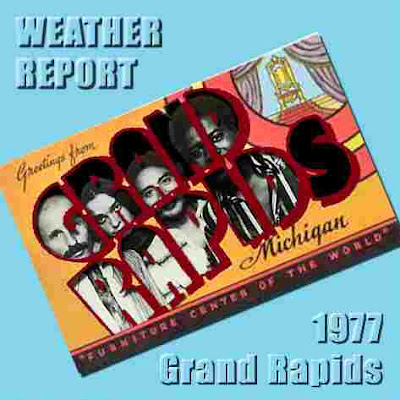 While I'm featuring jazz fusion-prog rock from the Seventies, we can't forget one of the pre-eminent jazz-rock bands of that time, Weather Report. Weather Report was formed in 1970 by jazz keyboardist Joe Zawinul, saxophonist Wayne Shorter, and Czech bassist Miroslav Vitous. Although the band had a revolving door of drummers and percussionists over the years (Most notably Alphonse Mouzon, Chester Thompson, Alex Acuna, Peter Erskine) and multiple bassists (Alphonso Johnson, Jaco Pastorius, Victor Bailey), Zawinul and Shorter were central to every Weather Report lineup.  Both Shorter and Zawinul had worked with Miles Davis (most prominently on In a Silent Way, 1969) prior to forming Weather Report, and the early sound of the band leaned more towards an avant-garde jazz style building on the what Davis was doing. By 1973, the band was moving more towards a jazz-funk groove-oriented style, and Zawinul was a pioneer in the use of synthesizers in jazz. With both Shorter and Zawinul being first-rate composers (along with the later addition of Jaco Pastorius), Weather Report featured more structured and melodic songs than most jazz-oriented bands. By 1976, Weather Report moved further toward a jazz-rock-oriented approach, Bassist Jaco Pastorius joined the band, and their albums Black Market (1976) and Heavy Weather (1977) were their most popular and successful yet, culminating in an actual 'hit' in 'Birdland'. Here is a show from Weather Report around that time, a very nice soundboard recording of a show from Grand Rapids, MI in 1977. Although the recording is a bit short (may have been edited down to under an hour for radio broadcast), it features several songs from both Heavy Weather and Black Market. And since this recording did not include their most popular song, 'Birdland', I have added a version from another show (1978 audience recording - Providence) to round out the set.
Tracklist:
1.  Elegant People
2.  Scarlet Woman
3.  Teen Town
4.  A Remark You Made
5.  Interlude
6.  Black Market
7.  Its About That Time
8.  Night and Day
Bonus Track:
(1978-11-12 - Providence, RI, Aud)
9. Birdland