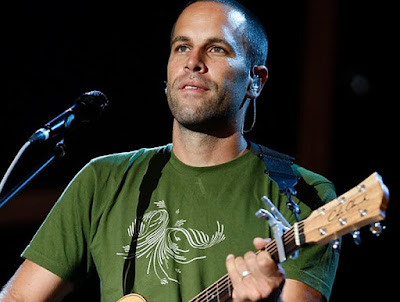 How about some Jack Johnson? I was listening to him recently for the first time in quite awhile and realized how much I really like a lot of his music. It's just really ... nice. Clever, fun, enjoyable, satisfying, with his laidback style and breezy delivery making it seem so effortless, yet nonchalantly expressing some surprisingly meaningful lyrics and sophisticated songs. And since I have not featured him here before, figured it was about time. Jack Johnson, born and raised in Oahu, Hawaii, is the son of surfer Jeff Johnson, and was an award-winning professional surfer himself, as well as filmmaker (of surfing films), before turning to music full-time. His band in college at UCSB, Soil, opened for early gigs by bands such as Sublime and Dave Matthews Band. A demo of Johnson as a solo act caught the attention of Ben Harper's producer in 2000, which led to the recording of Johnson's first album, Brushfire Fairytales (2001), as well as an opening spot gig with Ben Harper on his Innocent Criminals Tour. By his second album, On and On (2003), Johnson was recording in his own home studio and had his own record label, Brushfire Records. An avid environmentalist and sustainability advocate, Johnson transformed his recording and business with solar power, recyclable packaging, and eco-friendly practices, and frequently donates the proceeds from his concerts to environmental charities and causes. His next album, In Between Dreams (2005) became his mainstream breakthrough, going multi-platinum, and with such as 'Good People', 'Sitting, Waiting, Wishing', and 'Breakdown'. Johnson followed that success with an album of songs (made with his various musician friends) for a children's animated film, Sing-A-Long Songs and Lullabies for the Film Curious George (2006), also to great success, and the hit single 'Upside Down'. Following his next album, Sleep Through the Static (2008), he embarked on his biggest and most ambitious world tour. Featured here is a show from that big World tour, a wonderful audience recording from his San Diego show. I specifically chose this tour to feature because it was the only tour that included the song 'Sleep through the Static', which is one of my favorites, an underrated classic, as well as so many other memorable songs in a great show.  FYI: Johnson is another artist who supports audience taping and sharing and whose shows are featured and collected in the Live Music Archive, where literally hundreds of his shows have been preserved (mainly audience recordings) and are available for listening, downloading.