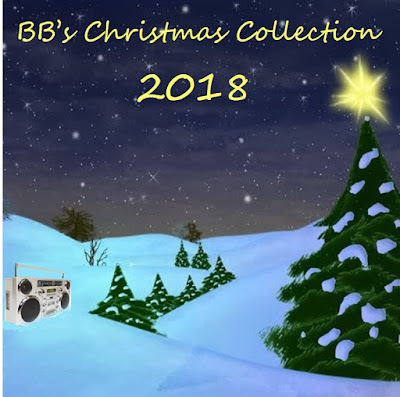 Taking a short Holiday break from the Progressive Rock features: It's the Christmas season and time for another of my biennial Christmas compilations (because every year is just a bit too much for this type of thing, every other year just about right). This year I've got a another wonderful overstuffed hodgepodge of eclectic selections for your seasonal enjoyment. This 2018 edition highlights cuts from several new holiday releases (2017-2018) from popular artists, including Eric Clapton, Michael McDonald, The Mavericks, Ingrid Michaelson, and Cheap Trick, as well some oldies, classics, and a healthy dose of power pop. A few of the traditional Christmas songs are included, but (as usual), the bulk are non-traditional. One mini-theme this year embraces some attempts to raise previous novelty songs to full-fledged serious Christmas fare, as with The Chipmunks' 'Christmas Don't be Late' (done as a ballad by She & Him), SNL's cheesy 'I Wish It Was Christmas Today' (with full rock treatment by Cheap Trick), The Beatles fragment 'Christmas Time is Here Again' (fleshed out as a mashup with 'Flying' and "Baby You're A Rich Man' by The Weeklings), and Slade's 'Merry Xmas Everybody' (polished up into a power pop beauty by Sloan). Also included is a nod to my recent progressive rock features, with a couple holiday tracks from Yes veterans Jon Anderson and Chris Squire, as well as a holiday remembrance to the departed Queen of Soul, Aretha Franklin. Also, I have to give a special Thank You (and apology?) to Angelo from the Power Pop Criminals blog, because I leaned heavily on (stole?) several tracks from his own 2017 Power Pop Christmas Compilation (Very Merry Christmas), as he really knows Power Pop and does these things so very well (with inclusion of great songs by bands I never would have known), so great job there (and check his blog for all the previous years of great compilations and other stuff). Being pressed for time, I put this together really quickly, but I think it turned out great (at least I am really enjoying it). Anyway, hope you all check this out and enjoy it. Merry Christmas to all and wishes for a very Happy Holiday season!

One other note: I've always thought Stevie Wonder's 'What Christmas Means to Me' was a great contemporary Christmas song that has been underappreciated and underutilized (few covers). So, I was delighted to see it get some respect and inclusion in multiple new Christmas releases this year, including new versions done by Pentatonix, John Legend, and Michael McDonald, and intended on including the best of these new versions on my new compilation. However, after hearing them, none quite captured the essence and spirit (or coolness) of the original version, so I (of course) went back and included the original 1967 Stevie Wonder version instead. Sometimes you just can't improve on the original.

Just to wish you a good festive season and to thank you for all the posts over the years.

Thanks for the Xmas tunes, and for all of your great stuff year-'round. It's appreciated and enjoyed.

Just to wish you a good festive season and to thank you for all the posts over the years.

Thanks for this, a very enjoyable listen.

Thanks! I love your blog but I haven't been here in a while! - Stinky

help full for me
iAMHJA

Just found my way to your blog — I think I'll be here often! Thanks for this, and lots of other goodies yet to be found. Best wishes to you and yours this Christmas season.