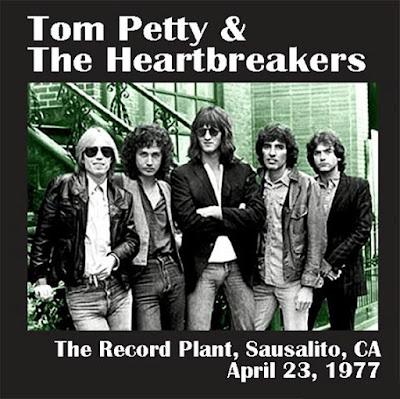 Although I've previously featured various Tom Petty shows from throughout his career (primarily from either his very early days or more recent shows), I have not featured his full career in chronological live shows as I have for several other featured artists. So, given his recent passing (R.I.P. Tom), it seems long past time to feature more from his concert career.
I have already chronicled his early days in Gainesville, FL with Mudcrutch, and how The Heartbreakers first came about, as well as how they were not successful right away. The first Tom Petty & The Heartbreakers album was released in November 1976, with 'Breakdown' released as a single in January 1977 (which suffered a quick death). 'American Girl' was subsequently issued as a single in February 1977, as the band was preparing to go out on their first major tour (as a support act). Unfortunately, 'American Girl' also failed to chart in the US, but they were getting some attention in the UK, and released 'Anything That's Rock & Roll' there in April where it scored the band's first top 40 UK hit, and 'American Girl' also later cracked the top 40 in the UK. Although the band was not getting much airplay in the US, they were starting to garner attention from their live shows, which included a couple early radio broadcasts, and appearances at Pinkpop and Rockpalast in Europe. Slowly, after their success in the UK and europe, they started getting some respect in the US as well, and when 'Breakdown' was rereleased in the US in early 1978, it finally did just crack the charts (Interestingly, however, 'American Girl' was never a hit in the US), and the album did eventually go gold. Here is a great radio broadcast show from those early days of the Heartbreakers, recorded at The Record Plant studios in Sausalito CA with a small audience in April 1977, near the beginning of their 1977 tour. It's a great-sounding recording, featuring, in addition to several songs from their first album, some nice covers, and a couple brand new songs, including future hits 'I Need to Know' and 'Listen to Her Heart', which would be on their 2nd album (You're Gonna Get It), and which would not be released until 1978. This set also includes the live-only rocker 'Dog on the Run', which was never recorded or released on any album (not to be confused with 'Dogs on the Run' from Southern Accents, which is a totally different song). It is played as an extended jam here, was played often in these early days, but never again after that, so that is an additional treat for those that have never heard it. Also, it's interesting that 'Breakdown' was not included in this performance (or at least not the broadcast tracks). Perhaps it was briefly dropped after it's failure as a single, as at the time 'American Girl' was being promoted as 'the single' (just interesting because it became such a standard for the band - can you even find any other shows that did not include it?). Also, since this a rather short radio show I have added a few tracks from another excellent radio broadcast from later in 1977, their show from Capitol Records studios, Hollywood, on November 11, 1977 (and which did include 'Breakdown' and UK hit 'Anything That's Rock & Roll', as well as a couple more nice covers. Great stuff from the early days of Tom Petty and The Heartbreakers.

Thanks for another great Petty show BB.still devastated by Toms passing .been two weeks now and the sadness hasnt subsided one bit. Tom was such a part of my musical life.a soundtrack of my youth.To me he was the one who kept music alive once the 80s and other decades kicked in as lets face it.music in general has generally declined since around 82 or so and today mainstream music to me is horrible with autotune and other computer enhanced noise masquerading as music.Thru it all Tom whether with the heartbreakers ,Wiburyies or solo kept the music pure and real and was a constant reminder of what great music once was in the 60s and 70s.Tom always stayed the course and never sold out or waivered .Thanks Tom the music truly died when you did for many of us.

I've been looking for the Capitol Studios broadcast for years and was never able to track down anything but the version of "Breakdown." This is in excellent quality, too! Thanks!

Well, I've gotten many great, hi-quality radio shows from you over the past few years (much thanks!), so it's nice to see I have one that you don't that I can share. and so, just for you, here is the full Capitol Studios broadcast, just the way I got, in super 24-bit/96Khz Lossless quality, and it is a great show in quite excellent quality. However, it is only 8 songs, which is why I went with posting the Record Plant show instead, and just supplemented that with the songs from the Capitol show that were not played at The Record Plant show. So, hope you enjoy this, too. Note that because these files are 24-bit, the download is quite large. Enjoy.

Thanks! This is a fabulous discovery, and one I've been on a search for, for over a decade. I think this live version was distributed to several radio stations around the country late in '77 or early '78 and helped the single version finally hit the charts!

Hey Thanks for posting this! Stumbled over here looking for Dog on the Run after watching Runnin Down a Dream once again and wondering what the hell that song was that Ron Blair was playing the shit out of in the film! What a rocker!

I do want to let you know though, there appears to be something wrong with the 4 Bonus tracks from the Capitol Studios show in the MP3 download... they seem to be waaaaaay slowed down and are super long and sound like cookie monster as a result. do you know what's up with those?