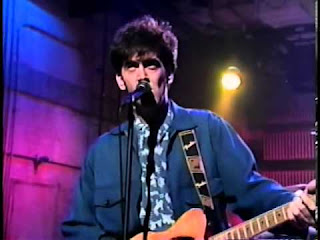 OK, so I took a bit of a break from the blog since the last post, but hey, it's summer, lots of other things going on. Anyway, I'm back now, and here today is another installment in the too-large group of sadly underappreciated, critically-acclaimed but sales-challenged artists, who shoulda been big but never quite made it. Today we feature veteran American power pop rocker Tommy Keene, known for his driving guitar-driven power pop with a keen rock edge. Keene hails from Bethesda, MD and attended the University of Maryland. Tommy first gained major attention in the mid-eighties, when his first major label release (Songs From the Film-1986, Geffen) garnered acclaim and managed to crack the Billboard Top 200. His subsequent album in 1989, Based on Happy Times, floundered, and he was dropped by his label. After playing in a couple other bands in the early nineties, he found his stride again with a couple new LPs (Driving Into The Sun-1994, Ten Years After-1996), and has been continuing undaunted ever since, right up to the present, as he is currently touring, opening for Matthew Sweet. He has survived on an avid cult following that has enabled him to ascend to legendary status among Power Pop aficionados, despite virtually no radio airplay and never again cracking the charts. Here is an excellent recording from his 1996 tour, featuring a fine selection of his songs from that time. So, check out Tommy Keene, from 20 years ago, then we'll feature some Tommy from more recent years. Good Stuff.