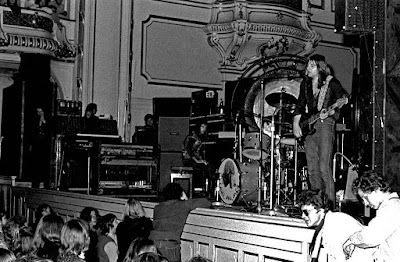 Wow, as I was preparing this (and a few other) ELP shows in tribute to (the recently deceased) Keith Emerson this week, got word of still more tragic and unexpected deaths of memorable rock artists and musicians. Of course, everyone is talking about the loss of Prince, but there were others this week, too, including legendary blues-rock guitarist Lonnie Mack (whose pioneering virtuoso lead guitar soloing style was a major influence on Jeff Beck, Eric Clapton, Stevie Ray Vaughn, and virtually every rock guitarist after), and multi-instrumentalist Pete Zorn (long-time member of Richard Thompson's Band, as well as stints with Gerry Rafferty and Steeleye Span). But the most shocking, unexpected, and devastating to fans was the death of Prince at 57, as he seemed to be in fine health and still very productive. Now, to be honest, I was never much of a fan of his music, overall (just not my style), but it is impossible not to recognize his vast talent, creativity, and artistry as a totally unique and dynamic artist and performer. There is no one else like him and his presence will be missed in the music world.

But today, I am still honoring the life and music of an important death from last month, keyboard virtuoso and progressive rock icon, Keith Emerson. Although today, the progressive rock movement of the (late 60's and) early 1970's often gets dismissed as trivial or some quaint musical oddity, let me tell you, it was (and is) a very big deal, and quite important in the continuing development of Rock. This time period corresponded to my high school years, and progressive rock was my favorite music, and very important in my own musical development. Progressive rock sought to move rock away from short, dance-beat singles to greater artistic and technical sophistication through use of experimental instrumentation, compositional structure, harmony and rhythms, through incorporation of instrumental virtuosity,  long-form compositions, and techniques and styles from jazz and classical music. Progressive rock is a mainstay of my musical background, but (other than Genesis), I have not featured it very much here on the blog. So, honoring Keith gives me a chance to present some more here now. At the time, progressive rock was very popular (Pink Floyd, Yes, Jethro Tull, Genesis, King Crimson, Moody Blues all at their peak), but for a time, ELP were the undisputed kings of the genre.
Keith Emerson first earned acclaim and notoriety for his performances and antics on the Hammond organ with the group The Nice in the late 60's, where he first featured his 'symphonic rock' versions of classical pieces done as epic rock songs. By 1970, when he teamed with members of other  progressive rock groups, vocalist/bassist Greg Lake (from King Crimson) and drummer Carl Palmer (Atomic Rooster) to form Emerson, Lake and Palmer, they were already considered a 'Supergroup' (and received a record deal) before ever performing together. Their premier public performance (which coincided with the release of their self-titled 1st album) was at the Isle of Wight Festival in late 1970, where they made a big impression, and became very popular very quickly thereafter. With ELP, Emerson became one of the most prodigious and prolific users of the (relatively recently developed) Moog synthesizer, which permeated the band's sound. The band and their music continued to grow and develop through multiple hit albums throughout the 1970's, such as Tarkus (1971), Trilogy (1972), and Brain Salad Surgery (1973), with Emerson's reputation as a keyboard virtuoso and master showman growing throughout (was sometimes referred to as "the Jimi Hendrix of keyboards").
Here is a show from very early in their career, in support of their first album. Like many other acts from this period, there are many recordings of shows from this period available, but very few of very high quality. This is one of the better quality recordings, as it comes from a TV broadcast, and features all the varied aspects of their live shows from that time, from Jazz, blues, and classical piano to folk-rock, to prog rock weirdness (and extended drum solos) to madcap classical rock ('Nutrocker'). Here's ELP in their earliest form.

Photo this is not the stage in Düsseldorf