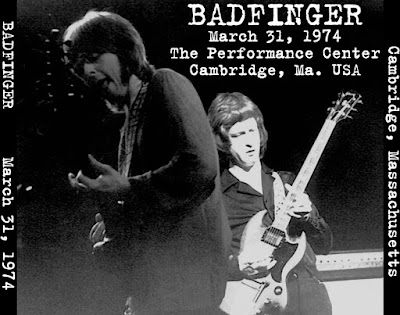 Here's more live Badfinger, this time from their subsequent US tour in March 1974, which featured many new songs, as it followed the release of two different Badfinger albums, one for Apple (Ass - 1973) and one for their new record company, Warner Brothers (Badfinger - 1974). Their performance is wonderful, but by this time, the band was overworked and in much turmoil, and things were about to go from bad to much worse. Recording for Ass, their last contracted album for Apple, started in 1972, but trouble started almost immediately, with producer Todd Rundgren leaving after 1 week (and 2 finished songs), in a money dispute with Apple. Badfinger continued recording, producing themselves, but after substantial additional recording, Apple was not happy and insisted they start over, with Engineer Chris Thomas as producer. Apple was a financial mess at this point, and Allan Klein's offer to the band for a new contract was worse than their previous one, so band business manager Stan Polley took them to another label. Thus, in 1973, as they were still working on Ass, they signed Polley's deal with Warner Brothers, which required 6 new albums in 3 years. By this time they were beginning to suspect Polley's bad financial dealings, but were talked into the promise that the new deal would earn them millions. Unfortunately, the band would never see any of that money. As per their deal with Polley, all band earnings (from recording, touring, publishing, and even songwriting royalties) went into a holding company, controlled by Polley, with the band members receiving only a meager salary stingily doled out by Polley. And no sooner had they wrapped up the recording sessions for Ass at Apple, they were whisked back in the studio to start working on their first album for Warners. The new album, intended to be called 'For Love or Money', was again produced by Thomas, but was hastily written in the studio as they recorded. As it happened, both albums, Ass and Badfinger (the intended title 'For Love or Money' was left off the final album) were released around the same time, Ass in late 1973, Badfinger in early 1974, confusing fans, with neither doing very well or producing any hits. The band then embarked on their US tour in Spring 1974, followed immediately by going back to the studio to record their 2nd Warners album, Wish You Were Here (which despite the rushed output, became one of their most beloved albums), followed by a UK tour, and then, unbelievably, back to the studio to record another album, all still within 1974. Thus, from early 1973 to late 1974, a period of about 1-1/2 years, Badfinger wrote and recorded 4 albums of material, as well as extensive US and UK tours. But by the end of 1974, additional problems arose when Warners found out about missing money from band escrow accounts, suing Polley and the band, and pulling Wish You Were Here from the shelves (after just a few weeks in release). In addition, they took the tapes from the last album (tentatively titled Head First), but would not release or relinquish them due to the ongoing legal battles (Head First was finally released in 2000, but only in the form of the original rough mixes, as the master tapes were never found). Apple also was involved in suing Polley, and also withheld payments (and pulled Ass from release). By this time, Joey Molland had had enough and was quitting the band. By early 1975, with Polley's mounting legal problems, any and all salary payments to the band members also stopped (and they found they couldn't even perform anywhere on their own due to the legal issues), and for the first time they became aware of how fully they had been mismanaged. In Spring 1975, desperate to receive any money to live on, Pete Ham discovered that all the money that was supposedly locked up and put away in the band's corporate account was gone, and he had nothing at all. He couldn't handle it and took his own life, hanging himself at his garage studio on 4/24/75. Although that was the end for Badfinger (remaining members all joined other bands, at least temporarily), financial and legal issues continued (with band members essentially having to sell-off most of what they owned, taking other menial jobs to survive). Eventually, in 1978, Molland and Evans joined together in a re-formed version of Badfinger, releasing two albums, Airwaves (1979) and Say No More (1981), but it just wasn't the same. In 1982, Molland and Evans split again, with each forming rival versions of a touring Badfinger band. Amid further financial problems and disputes, and following a heated argument with Molland, Evans, who had never quite gotten over the death of Ham, hanged himself on 11/18/83. In subsequent years, Joey Molland (sometimes with Mike Gibbins, until his death in 2005) has continued to tour and perform in various incarnations of Badfinger bands. I saw them in the mid-eighties (with both Molland and Gibbins present), and they were still very good then.

But despite their tragic history, Badfinger was a great band while they lasted. It's just such a shame and waste that they had to endure so much hardship in pursuit of their music, and that these outside forces destroyed not only the band and their music, but for Ham and Evans, actually took their lives as well. However, little of their ongoing struggles could be perceived from their stage performances. This performance includes both sets (same setlist) from a show at The Performance Center in Cambridge MA. It is an audience tape, but of very clear quality. However, the mix is very uneven, with the guitar way up front, loud and clear, but the vocals and drums way down in the background (must have been recorded right near the guitar amp). Thus, it is not an ideal recording, but still one of the best ones available from this tour. The set features many new songs from the Ass and Badfinger albums, as well as past classics, including 'Perfection' (one of my favorites that was not done live very often) from Straight Up, as well as a cover of Dave Mason's 'Only You Know and I Know'. So, it is a fine show (2 shows actually), and if you really like the guitar sound up close and dominant, this one's for you (less spectacular if you are a more a fan of their vocal harmonies, which are a bit distant). Sad that only about a year after this performance, Pete Ham would be dead and the band no more. But again, the band lives on in their recorded history, both live and in studio. And here we are, 42 years later, in 2016, enjoying these performances all over again.

Thanks for this great document to music history Stan Polley was a despicable human being and was responsible for two deaths in my opinion. The irony is that he lived to a very old age.So much for life being fair. Badfinger was a part of the soundtrack of my youth,can still remember driving my 64 Buick Wildcat remember those and Baby Blue and Day after day were on the radio. What a time to be a music fan

hello..!! greetings from Malaysia.. please visit me at :- http://albumretro.blogspot.my/