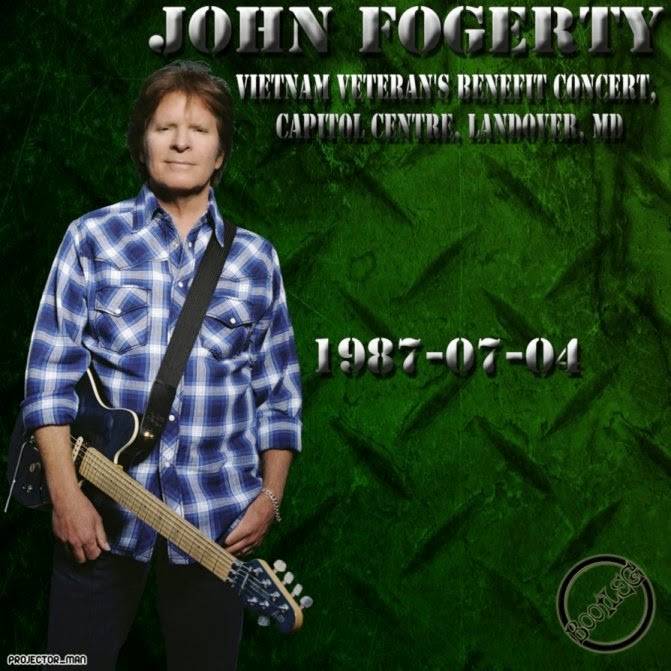 Going back down through the years with John Fogerty, here is a great sounding show from 1987, and one that  is especially significant (and historic), because this was the first show where John played Creedence songs since he left Creedence Clearwater revival 15 years earlier. As you probably know, John had major disputes with his label, Fantasy Records, and Saul Zaentz, the head of Fantasy. Like many artists back in the 60's, eager to sign with a record company, CCR got a bad deal from Fantasy, giving Fantasy all the distribution and publishing rights to their songs (all of which were written by Fogerty). Even worse, what money CCR did get from Fantasy was 'reinvested' by Fantasy in various shady tax shelters and schemes, which ultimately lost many millions of dollars. When Fogerty split from CCR to get away from Zaentz and Fantasy, he was frustrated to find that Fantasy still retained control over his solo career, too. So, John signed away even more of his CCR royalties in order to get out from under the Fantasy contract. Thus, he refused to play any of the Creedence songs anymore, because he could not stnd to see Zaentz profit further from his performances. For several years, Fogerty didn't play at all. But in 1985, John released his breakthrough solo album, Centerfield. But, the dusputes with Zaentz still did not end. Zaentz sued Fogerty claiming that one of the songs on the new album, the hit single 'Old Man Down the Road' (which Zaentz did not own), plagarized John's own Creedence song 'Run Through the Jungle' (which Zaentz owned the rights to), thus denying him millions in revenue (he sued for $140 million!). Thus, Fogerty was essentially sued for plagarizing himself. Fogerty won that case, including getting attorney's fees from Zaentz. But that was not the end of it. John also had a couple of songs on the album that were thinly veiled attacks on Zaentz ('Mr. Greed' and 'Zanz Can't Danz'), so Zaentz sued him for defamation, too (Fogerty changed the title to 'Vanz Can't Danz' as a result. Anyway, all this was still going on in 1987 when John was asked to play the closing set at the Vietnam Veterens Benefit (also featured that night were Stevie Wonder, CSN, Linda Ronstadt, Kris Kristofferson and Neil Diamond all playing just a song or two, and then John closing with a full set). In rehearsals, John played only solo album material, no CCR songs, but then at the show, as his set opened with the intro to 'Old Man Down the Road', and then it happened, one of those magical moments that occur just once in a musical lifetime. Fogerty stopped, huddled up with his band mates, and then launched into 'Born on The Bayou'! The rest of the set was all Creedence classics. From that show forward, CCR material would again grace every Fogerty concert! Now, to be completely accurate, it was not the first time that Fogerty played any CCR song live, because earlier that year (1987-02-19), at an impromptu show in Hollywood with Bob Dylan and George Harrison, Bob Dylan urged him to start playing 'Proud Mary' again ('so people wouldn't think it was a Tina Turner song'!), and Fogerty did play 'Proud Mary' (but only that one CCR song that night), but perhaps that show got him thinking about playing all his old songs again. So, this was the first time he played multiple (and even a full set) of CCR songs since 1972. During the show (track 5), John talks to the audience (the vets) about facing past pains, letting go of all the injustices done to you, and moving on with your life, and perhaps that was what he decided to do regarding his own music. This show is widely available, but it is a great recording, and certainly a historic night, and John, of course, is wonderful.

This recording from "The RS Archives" (a Mexminute/TheCommish production)

Well, I like this songs! But is there anyone who knows the band members?