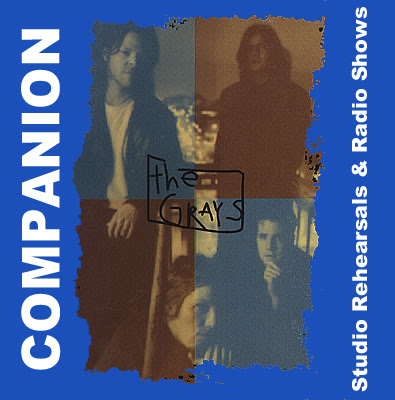 OK, while we're in the realm of quality Power Pop, and in particular, delving into short-lived, neglected, and underappreciated bands, let's move from the 'eighties up to the 'nineties now, and feature a somewhat legendary (in Power Pop circles) but little-known temporary assemblage that was known as The Grays. This very brief, but productive union of three talented singer-songwriters and multi-instrumentalists, Jason Falkner (previously with The Three O'Clock, Jellyfish, and later to go on to an impressive solo career), Jon Brion (worked with Aimee Mann, the eels, and others), and Buddy Judge (?), along with drummer Dan McCarroll, only produced one released album, the highly acclaimed, but sales-challenged and now out of print Ro Sham Bo (1994). Nonetheless, the high quality of their only album together is mind-boggling, it is just a sensational pop-rock album, with all three songwriters sharing, combining, and contributing great songs, wonderful melodies, a great sound, and shimmering pop production. It is quite possibly better than anything else any of them have been associated with (and since that includes Jellyfish and Jason's solo work, that's saying quite alot). Now, I have to admit that I had never heard of them before either (I had previously heard some Jellyfish and Jason Falkner solo (and liked them), but had never heard of The Grays, until just recently, when they were featured at Willard's Wormholes (much thanks, Willard!), and let's just say that I was mightily impressed and wanted to pass them along to you here. Although I can't post their official album release here (but perhaps Willard can help you there), I can post these unofficial recordings, which consist of some studio rehearsals, covers, acoustic takes, and radio sessions, to give you a taste of what they sounded like, and what such a shame it was that they couldn't have stayed together long enough to make more of this music. Still not convinced to give them a listen? Well, how about this enticing description of their music (from their Wikipedia page) as being Beatlesque, but with a harder edge. Yeah, sounds pretty good to me (and the all acoustic takes are wonderful, too).