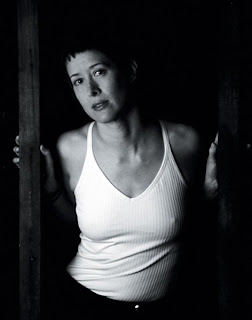 
Here's one more fine female singer-songwriter to feature before I move on to other music, this one going back a few more years. Michelle Shocked was thrust into the Music Scene in the mid-late '80's, when a bootleg tape of her performing (dubbed 'The Texas Campfire Tapes' was released in europe (without her knowledge or consent). But even this poorly recorded performance received such acclaim and notoriety that she was offered a 'real' recording contract with Mercury. What followed were three excellent albums, each focusing on a different style or type of music. First was Short Sharp Shocked (1988), which was mostly a folk-type album (some called it punk-folk) that chronicled the people and places from her upbringing in east Texas. Next was Captain Swing (1989), which channeled her unique style through Swing, gospel, and soul sounds and styles. Then came Arkansas Traveler (1991), which was bluegrass and country-influenced, and featured several standards. But Michelle has always been fiercely independent, and socially and politically outspoken, and despite the high quality of these albums, she did not want to be working for some record company and have to do things their way. So, by 1994, she had left to go out on her own, first with a small independent label, and then eventually with her own music company and label (Mighty Sound), where she has continued making music in her own way. Now, I have to admit that I have not heard much of her music since she went out on her own, but she has kept busy, releasing several albums over the last several years (If anyone knows about and wants to contact me or comment on her independent releases, by all means do so, I'd love to hear more about them). And quite notably, she was able to re-acquire all the rights to her previous Mercury albums,  and has put out deluxe expanded editions of those albums on her own label, too. Unfortunately, there are not many recorded concerts of hers available. The one featured here, comes from 1989, earlier in the year, prior to the release of Captain Swing (and not containing any songs from it, unfortunately, as it is my favorite album of hers). Thus, the material comes primarily from Short Sharp Shocked, so it is early in her career, but shows her talents well. And it is an excellent quality Pre-FM recording, so it sounds great.

This is one hell of a post, I saw her twice when she was doing this tour, she was gorgeous!
Thanks a lot for this!
Al

Thanks again for sharing BB.
If you have not heard it, her "Kind Hearted Woman" from 1994 was an amazing album. Very strong writing I felt.

Any chance this will get an upgrade to Flac?
Thanks!