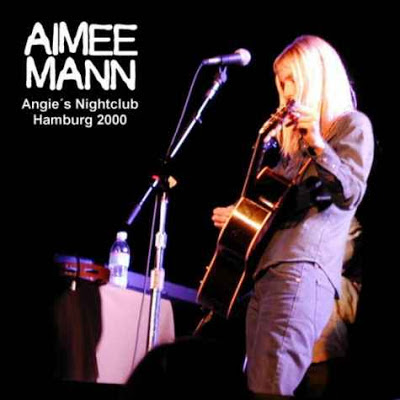 Here's another of my favorite female singer-songwriters from recent years. I first heard Aimee Mann around 1999 (on 'You Could Make a Killing') and was instantly taken with her style and sound. Then I heard her songs in the Paul Thomas Anderson Film Magnolia (1999) and had to hear more from her. That was followed closely by her Bachelor No.2 (2000) album, which (together with the Magnolia songs) is I think her very best work, and then the Lost in Space (2002) album, which is also very good. I just love her cynical, world-weary, yet also breathtakingly beautiful vocal style and inimitable songs. No one else quite sounds like or has a style like Aimee Mann (For a rather depressing, yet also strangely uplifting, Christmas album, check out her One More Drifter in the Snow-2006). So, featured here are a couple of live sets from what I consider her very best period, covering from
1999 to 2003. The 2000 Hamburg show features a great recording, but a too-short set (perhaps from a radio broadcast?), so I have added to that with a couple songs from 1999 and most of her full show at the Norva in 2003, which is not nearly as good a recording (audience), but features her full set and many different songs (several from Lost in Space). So, please, enjoy some Aimee Mann.

The Norva set is not her complete set. I was there, and wrote them down: