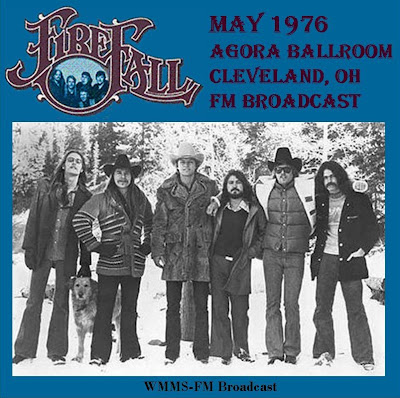 Here's another Firefall show, this one from 1976 early in their tour promoting their first album, or almost a year later than their 'Other End' debut show (available here). By this time they had added David Muse on keyboards and wind instruments to their lineup. This is another one I got from our friend David M, although he did not tape this himself, he got it in a trade way back in the '70's and it evidently has had very limited circulation. This one is unique because it is a high quality radio broadcast recording. As is typical for these radio shows, it has a much shorter setlist  than usual (such as than their other available show from this period, Paul's Mall, Boston 1976-05-05) but higher quality audio than the previously available audience tapes. So, enjoy this Firefall show, once again courtesy of David M.

Late-comer to your blog. I'm really finding your posts fascinating. I especially enjoy the history surrounding the bootleg recording.

This Firefall offering is wonderful. And...like many of your posts...gives listeners a glimpse of the development of a band and/or their songs. That's exciting.
Thanks!