The Who - Lifehouse Compilations - This Old Lifehouse 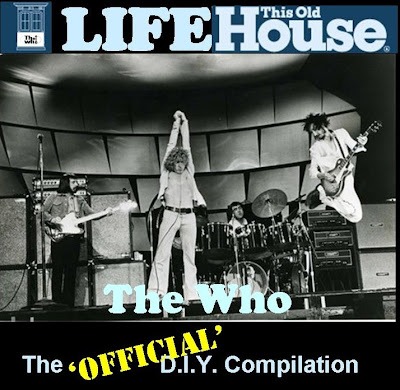 The Who
This Old Lifehouse
The ‘Official’ D.I.Y. Compilation

Since I first became aware of it in the 1970's, I have been fascinated with the music of Lifehouse, Pete Townshend and the Who's abandoned 1971 musical project. Although most of the songs have been released sporadically in various bits and pieces over the years, I have been waiting ever since that time for a comprehensive collection of The Who's Lifehouse songs to finally be released. Except for Townshend's Lifehouse Demos (which are simply fantastic, but still demos, and not the Who's versions of the songs) which was released in 2000 as part of the Townshend's 6-CD Lifehouse Chronicles, I am still waiting. A few years ago, when I discovered the vast warehouse of unreleased and bootleg material available, I immediately searched for anything related to Lifehouse, but was again disappointed to find that no one had actually attempted to reconstruct a Lifehouse bootleg. So, it came down to me doing it myself.
As anyone knowledgeable of Rock ‘n Roll history knows, in 1970, as a follow-up to their enormously successful rock opera Tommy, Pete Townshend proposed an even more ambitious project, Lifehouse, a multimedia event that would encompass live concerts, a motion picture, and a double album. The concept combined teachings from Townshend’s spiritual mentor, Meher Baba, with a science fiction-based storyline. Lifehouse was meant to explore the idea that music is the fundamental basis of all life - that every human being on Earth has a unique musical melody that "describes" them, and only them, perfectly. When the unique songs of enough people are played in unison, the result would be a single harmonic note - the One Note. As a very brief synopsis, the story was to take place in 21st century Britain, in an age where pollution has become such a drastic problem that people spend most of their lives in impervious "experience suits" which are connected to a universal grid and supplied with entertainment and artificial life experiences by the government. Along comes Bobby, an electronics wizard who rediscovers 20th Century rock and roll music, takes over a disused rock theater, renames it “The Lifehouse”, and breaks into the computer network controlling the suits to invite people to leave their suits and come together for a concert. Despite the best efforts of the government, thousands of people gather at the Lifehouse, as the musicians (The Who) and audience perform classic rock n roll, as well as experimental songs interacting with the audience designed to eventually achieve the ‘One Note’. However, the details of the story are immaterial at this point, what matters most is the great music that Townshend had written and planned for the project. Townshend wrote close to 30 songs either specifically for or to be used in some way (such as for the rock concert portions) in the project. This was undeniably Townshend’s most productive period, and much of the best music he ever wrote went into Lifehouse. Lifehouse is probably the greatest rock album never released, and could have been The Who's best album. But, as problems in the development of Lifehouse mounted, and the grand scale of the project was falling apart, it was decided to abandon the concept and just put out a single album containing some the best stuff, and to make it just a solid hard-rock album. The resulting ‘compromise’ album, of course, was Who’s Next, generally considered the Who’s Greatest album, and one of the greatest rock albums of all time. But it still is not what it could have been, with dozens of great songs left behind.
Because so many of the songs intended for Lifehouse have been officially released in some form or another, as I began looking into making this compilation, it became clear that there should be 2 distinct collections: one that compiled all the officially released studio versions of the Lifehouse material, and one that contained unofficial recordings, mainly live versions, of the Lifehouse songs, that could be shared, distributed, and downloaded among fans. The ‘official’ collection, is presented only as a tracklist and information on where to find (what official albums contain) the appropriate tracks. I have put both collections under the umbrella title of ‘This Old Lifehouse’, with the ‘official’ collection dubbed ‘The D.I.Y. Compilation’ (Do-It-Yourself), as it requires Who fans to compile the collection themselves using their own purchased album collections. The other set, designated ‘The Bootleg Reconstruction Project’ is the compilation of various unofficial live recordings, studio sessions, and demos, that have not been officially released, and that will be dealt with in a subsequent post. Here is the information for putting together the D.I.Y. compilation.

The ‘Official’ D.I.Y. Compilation provides track information regarding where to find the officially released tracks (on what albums they are located), so that one can use this information to compile their own ‘Lifehouse’ collection from their existing Who music collection (thus D.I.Y. – Do It Yourself).
Note: Track order was arrived at by combining information from existing available sources (such as Townshend’s Lifehouse Demos, Lifehouse Chronicles, the 2000 Sadler’s Wells Lifehouse Concerts, and other live shows) and arranged into a reasonably accurate and aesthetically pleasing sequence.

Coming Next: The long-awaited Lifehouse Bootleg Compilation
Posted by BBKron at 11:23 AM

Hey, LOVE your idea of a DIY official Lifehouse.

I've spent the last 2 days putting together my own using yours and Townshend's demos to come up with a 3rd variation, a 26-track version that goes like this:

Not sure if I'm going to keep that break or put Sister Disco at the beginning of disk 2.

In any case, thanks for the idea and the research!

Hi, what can I say? What work! I do a Who show via Facebook www.WhoCloudcast.com and plan to put this out as a show very soon. Just wanted to let you know. I will of course mention you for the research. Could I have permission to use the front CD graphic as a show graphic?

Sure you can use the cover graphics. I strongly support any promotion or encouragement for greater awareness and recognition of the incredible music created for Lifehouse and this project by more people. Good Luck with your project.

Any chance to get this re-uploaded? Thanks in advance!

Nothing to upload here. This is just a list of the songs (and where to find them) for putting together your own compilation (thus the D.I.Y.). These are all officially released tracks and thus cannot be offered for download here. However, if you are looking for my bootleg version of this Lifehouse compilation (and you really should have it), it is available here:
http://bbchron.blogspot.com/2012/05/who-this-old-lifehouse-bootleg.html