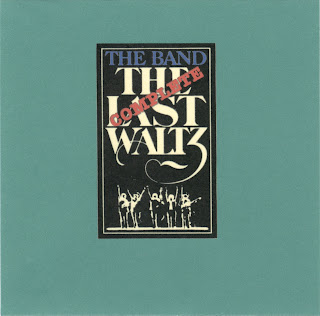 
Here it is, The Complete Last Waltz Bootleg, the raw, unmixed, unretouched soundboard tapes of the entire concert from that historic Thanksgiving Day (11/25/76) Show. This is the only recorded version that includes the entire concert from start to finish, and presents the show as a concert experience, rather than as an album experience. Yes, there is an official release that presents an expanded version of the concert (2002, Rhino, 4-CD Box Set), that includes several songs not originally included in the film or the original 3-LP or 2-CD releases, but it still leaves out several songs, and does not present all the songs in the actual concert order (The official expanded set fills up the 4th CD with rehearsal session takes and additional studio film music, rather than all songs from the concert). Also, the sound is vastly different on the bootleg from both the original and remastered expanded official releases. Don't get me wrong, the 4-disc Rhino release is exquisite and I heartily recommend it to all fans of the Band. Please, Go buy it. That project was meticulously remastered, crafted, and overseen by the perfectionist Robbie Robertson himself, and it sounds great!. But they also redubbed or overdubbed parts that were not clear, edited some of the songs, removed much of the crowd noise, etc. to create the best sound possible. What this bootleg version gives you is the actual concert experience, what it was like to have been there for the event itself, even with some sound limitations and mistakes (crowd noise, some instruments lost in the mix, or sloppy playing, etc. But it is still a fine sounding soundboard recording). I think both the expanded official release and this bootleg version are must-have for serious fans. Thus, this version is decidedly different from any official releases and does not infringe upon them. For a complete description of the differences between the official releases and this bootleg (and why you should get both), see This article from The Band's website (http://theband.hiof.no/articles/tlw_katz.html) and this article (http://theband.hiof.no/albums/complete_last_waltz.html) for a fuller description of this bootleg.

Thank you very much for The Band's "The Complete Last Waltz", BB.

Do you have another The Band's bootleg called "Across The Endless Highway", please? I am very looking for it...

The link is dead for the 3rd part. Could we have a repost please?

srcstcbstrd, Link for 3rd part is fixed. Thanks! And Lee67, sorry, but I don't have 'Across the Endless Highway' Thanks for your interest, Hope you like these Band shows.

Wow, I just finished downloading the first disc. This is great! Thanks so much for this!

Teekay, I have updated the links and all are working now. Thanks for letting me know they were deleted. Better get them soon before they go down again.

Many thanks indeed - thought I was going to lose this!!!!

Thank you so much for this! I just got into the band from the video game "rock band" and I've been looking for this everywhere mostly because I wanted to hear Chest Fever that didn't make the official version.

YOU ARE AN AMAZING PERSON!!!! SUCH LOVE FOR THE BAND IS INSPIRING!

Hi BB, long time no "see". Thanks so much for posting these, don't know how I missed 'em before. But they definitely come in handy now, as I am producing a Last Waltz tribute concert here in Portland in 6 weeks. We especially needed the full version of "Chest Fever". Thankfully all the links are still live! Glad you are still at your blog, I may kick the dust off mine one of these days...

I never did hear the full show. Thanks for this great share.

I've watched the DVD a bunch of times, but am now looking forward to The Complete audio version. It will be with a tinge of sadness, however. With the passing of Levon Helm this afternoon, the Last Waltz comes to a final end.

So glad to have this, thanks so much for sharing it.

Thanks for keeping this one live over here I jsut stumbled on it over at guitars....a different one from your that was already dead from 02/12 and then I found your earlier posting and JUST KNEW I could find this jem!

Great!
Thank you very much amigo.

I read the Wikipedia description of the 2002 release and it mentioned that there were incomplete versions of songs such as The Genetic Method/Chest Fever. I would like to know if these recordings include the unedited versions of these songs?

This recording contains the complete show, as played that night, undedited. So, if it was played at the concert, it is included here.

Great post! Thanks. I really enjoy your blog too.

Thanks for keeping the links to this significant concert 'live' for so many years. It's an important record. Six years must be some sort of record on a music bootleg site!

Your site has been in my Favourites for a few years. Many thanks for your work.

Thank you for sharing this!

Thanks so much for this, I have fixed up the album cover a bit (centering it, recoloring and cropping): https://www.dropbox.com/s/3e5wlna80dhilmp/Folder.jpg?dl=0

Many Thanks for this.

Is this the one where Robby's Guitar is missing or is it there? In the film,He'd Dubbed it in,since He didn't have it plugged in,for some unknown reason.